We use cookies on our website. They help us get to know you a little and how you use our website. This helps us provide a more valuable and tailored experience for you and others.

You can revoke cookies at anytime at the bottom of the page.

The installation of Norther's 44 turbines began earlier this month. It is the final and most crucial stage in the construction of Belgium's largest offshore wind farm. Twelve turbines have already been installed, and today, the first turbines are being connected to Stevin, the new high-voltage station of Elia in Zeebrugge. That way, the wind energy generated will flow into the power grid and will be sold to Engie (50%) and Eneco (50%). On final delivery, Norther’s electricity supply will cover 400,000 families' energy usage.

"The first connection of Norther to the power grid is a landmark event in realising the targets for renewable energy in 2020. Through our Stevin connection point, that was taken into service in 2017, we can inject offshore wind power into our grid. In that way, Norther and Elia contribute to the integration of renewable energy in Belgium's electricity grid."

The Norther wind farm is located 23 kilometers off the haven of Ostend and has a total capacity of 370 megawatts, the largest capacity of all Belgian wind farms. This way, Norther is actively contributing towards Belgium's 2020 climate targets.

“With this project, Belgium takes a big step forward in reducing its CO2 emissions. This is a landmark for everyone working on this project: the team, the contractors, the shareholders and the authorities. Without them, we wouldn’t be at this point."

Norther's port offices are located in the new port development zone in Ostend. This is where all the offshore players are gathered. This is the base from where the farm will be monitored and maintained.

"I'm overjoyed about this first important step in the operational stages of Norther. The more renewable energy we produce, the less we have to rely on other polluting technologies. At the same time, the offshore economy gives us jobs for the companies in the port of Ostend, not only for the construction but also later for the management and the maintenance of the wind farms. This proves us again that sustainability and economy can go hand in hand.”

Bart Tommelein, mayor of Ostend and former Flemish minister of Energy and state secretary for the North Sea

Norther is the sixth wind farm in the North Sea. Together, the six wind farms will provide electricity to a total of 1.3 million households. For the construction, Norther called in two suppliers, MHI Vestas Offshore Wind and Van Oord. Van Oord oversees the design, engineering, delivery, and commissioning of the foundations of the wind turbines and the electrical infrastructure (transformer station and cabling) and will be responsible for transporting the wind turbines. For this, Van Oord is using its jack-up ship Aeolus. Danish company MHI Vestas is supplying the 44 turbines which each have a maximum production capacity of 8.4 MW.

Norther NV is the company (50% Elicio, 50% Boreas—a joint venture between Eneco and Diamond Generating Europe) in charge of developing, installing, and exploiting the Norther Offshore wind farm. This farm—with its maximum installed capacity of 370 MW—is Belgium's largest offshore wind project. The project will be built 23 km off the Belgian coast. Its 44 state-of-the-art wind turbines will generate as much power as is used per year by some 400,000 families. Norther is now kicking off the work with a view to being operational in the third quarter of 2019.

Elia Group is an electricity transmission operator. We ensure production and usage are in balance at all times. We supply electricity to 30 million end users. With our branches in Belgium (Elia) and the northeast of Germany (50Hertz), we manage 18,600 km of high-voltage connections. That puts our group in the European top 5. Boasting a reliability rate of 99.999%, we provide society with a robust power grid, which is important for our socio-economic prosperity. We also aim to be a catalyst for a successful energy transition towards a reliable, sustainable, and affordable energy system. 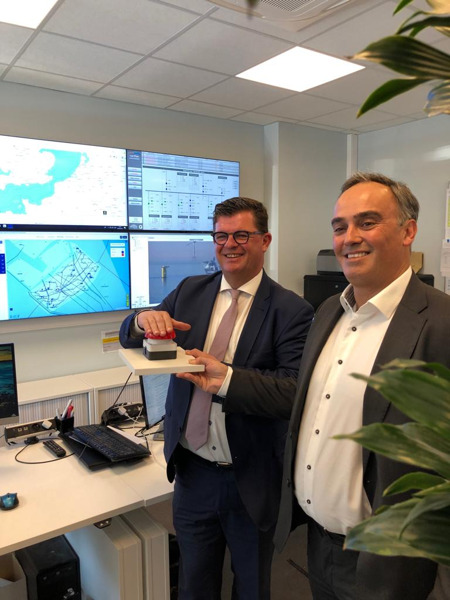 Norther NV is the company (50% Elicio, 50% Boreas—a joint venture between Eneco and Diamond Generating Europe) in charge of developing, installing, and exploiting the Norther Offshore wind farm. This farm—with its maximum installed capacity of 370 MW—is Belgium's largest offshore wind project. The project is built 23 km off the Belgian coast. Its 44 state-of-the-art wind turbines will generate as much power as is used per year by some 400,000 families.